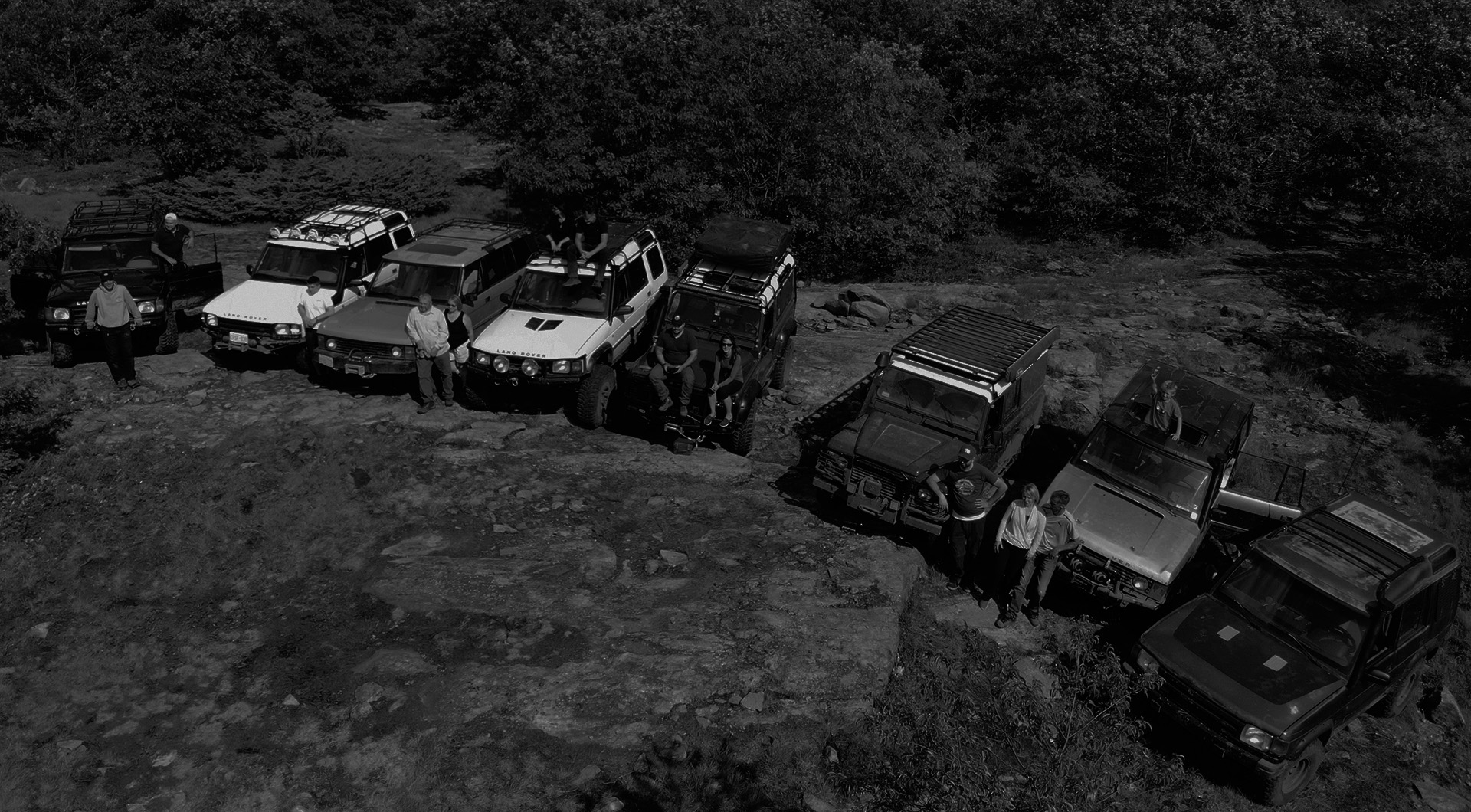 The year’s Summer Solstice heralded the thirty sixth annual Ottawa Valley Land-Rovers Club Birthday Party. Traditionally held close to the solstice, which is the club’s actual birth date, this year was the twenty-fifth in the Silver Lake area.

F or those who have not been, the Birthday Party is a multi-day event held in eastern Ontario, about sixty miles west of Ottawa, the capital of Canada.

Situated on the southern edge of the Canadian Shield, the landscape is varied including Canadian Shield(with gneiss, granite and marble) as well as limestone plains, with a variety of tills, sands and clays left from the melting of glaciers in the last ice age. The Birthday Party offers a number of varied trails in this area, on Crown (owned by the provincial government) and private land. Trails range in difficulty and challenges. On one end there are the trails associated with the abandoned K&P railroad to the traditional light offroad,with its numerous water crossings, bypasses, and opportunities for some deeper wading, which makes for a pleasant outing. At the other there are the more technically challenging trials like Levant, which turned an afternoon jaunt into a “three hour tour”1. There are some even more challenging trail than that, but they were not attempted this year.

„Great weekend and great intro to the club for my family and I. We left the site as the last person vehicle about 5:30pm just behind Ian and Charlie and Charlie jr. Did a quick lap around the field as my daughter melted down about not camping another night and playing with the kids. Thanks again, I look forward to the next event!!” -Curtis Chow, OVLR Member

The Event attracted a wide variety of vehicles, from the staid and sturdy Series Ones to some remarkably built up trucks, such as Patrick Findlay’s Disco 1. From a pair of bog standard 1951’s to a flip front 1956, through the Series II, IIA and IIIs in attendance to a good number of Defenders, which were the most common type this year.

For the more daring, some modified Range Rover classics and Discovery’s were off on the trails vying for experience in what was a fairly laid back event.

The weather was great, ranging between 56f (13c) and 70f (22c). Clear skies, unlike some past years where there was a deluge of biblical proportions (that would be 2000). Participants divided up into two different groups. One, preferring to be more with nature, camped out at the Birthday Party Main Site. While Port-a-Potties are there, it is an environment for more radical self sufficiency than the Silver Lake Provincial Park. The Park, on the other had, has dedicated campsites,showers and porcelain available. Both work well for their respective audiences.

More than a few vehicles got some rudimentary maintenance on the trails.

Alastair Sinclair’s “Little Blue Truck” experienced some challenges on the traditional light off-road. Ian Dejordon has an issue with a fan coming adrift. Rumour has that there was other challenges on the trails, but people are remaining quiet, least they become candidates for the Gasket Under Glass Award.

Friday also allowed different groups to leave both sites and so some exploratory drives down some of the trails.

One of these missions quickly came to the conclusion that the “new light off-road trail” now has a toll to be paid for access. A toll in the form of another “three hour tour” for a thirty something foot section of the finest post-glacial, black, ex-muskeg-like soil possible. Winches obligatory! Saturday was the main day for fun and excitement. Many of the trails in the area are on Crown Land, which is provincially-managed public land technically owned by the monarch, Elizabeth II, Queen of Canada.

One favourites is the “Traditional Light Off-Road”. The name is more than a bit misleading; there have been some years that this trail has had water over the tires, thanks to some very productive damming beavers. This year the water crossing remains dry, the first lake that had continued to rise was down a foot, allowing one to eschew the bypass if you wished to be brave. The “New Light Off-road” was blocked by an aptly named “pit of despair”. This year, overall, the water table was lower than usual. In some years various crossings can be totally underwater, and it takes trail-reading skills to not drive off into the deeper water to the side of the trail. Bolton Creek was low this year, something that can be hit or miss.

Some other members went on a “three-hour tour” to the Lavant trail system about an hour away, complete with technical challenges and breakdowns. They left in the morning and ended up coming back after dinner in the evening.

For the more relaxed, who have seen it all, they are happy to hang out in the tent at the event site and catch up with friends. Charlie Haigh surprised many with a visit up from Virginia to attend the event. Other long distance drivers included Ben Smith from New Jersey in the south and Bruce Fowler from Maine in the east. Others came from Toronto and environs.

There’s always a good selection of Rovers to check out, too. Canada allows vehicle imports after 15 years, instead of the 25-year rule for the United States, so there’s a lot of great, totally-legal late 90s and early 2000s Defenders at the event. A few members also end up bringing their other-brand vehicles if they have to; the focus of the event is very much on the people and coming as you are.

Saturday ends in a catered feast. This year, we also took a moment to dedicate the club’s expedition trailer to its late co-builder, founding OVLR member Alan Bates. The trailer’s nickname is “The Albatross,” because nobody wants to have to keep it at their house. Mike McDermott,another original OVLR member, read the dedication and told stories about building it with Alan in the 1990s. Dinner was a catered affair as last year from the folks who ran the restaurant on the highway.

After dinner, a few folks decided to take a short night run on some nearby private land opened up to the club for this event every year. Charlie Speedie led the night off-road in his 300tdi Discovery 1 for a bit of fun beneath the spotlights.

Sunday started off with Breakfast off the Albatross and the Birthday Party concluded with the annual auction.

OVLR is well supported by parts suppliers such as 3 Brothers Classic Rover, Atlantic British Parts, and Rovers North to a number of local vendors and suppliers. The auction produced some spirited bidding for some unique items, the proceeds of which will go to help the club to promote the use and preservations of Land-Rovers. Chief auctioneer was Benjamin Smith, supported byPeter Gaby and Dave Pell

After lunch, a few people went off towards different trails. Ian, with a sense of humour, lead a group down the new light off-road trail to the “Western Pit of Despair”2. However, realising the awaiting pit represented a potentially large investment in time, the sturdy Range Rovers and Discovery 1’s returned to base. A few people stayed the extra day at the Provincial Park to continue the process of winding down and relaxing before a return to work. Beach, lake, camp fires and quiet.

OVLR would like to recognize the support from several companies and groups, some of who have been supporting the club for thirty years or more:

A number of other OVLR members who donated items. Apologies on anyone whom I have missed. There were quite a few volunteers who ensured that the event came off without too much angst. The event supremo, Dave Pell, did an excellent job assembling for the Nth time a team of people responsible for various aspects. Amongst them were Terry King, Peter Gaby and Andrew Jones, who ensured that the Albatross was up to spec for serving up Michelin star chef Peter Gaby’s breakfast sandwiches. Peter was assisted by sous-chefs Roy Parsons and Garo from Montreal. Further assistance from Jerry Dowell.

Notes: (1) For the Millennials, look up or check out Gilligan’s Island (2) Western, because the first Pit of Despair is to the east in Benton Maine on one of the WinterRomp trails.

This write-up originally appeared in the July 2019 OVLR Newsletter

This site uses Akismet to reduce spam. Learn how your comment data is processed.

Your cart is currently empty.